With more than a hundred relatively small and crowded keys and their small print and sometimes low-contrast labels, a standard computer keyboard is a relatively complex device. Operating it can be troublesome for users with limited arm, hand or finger movement ability.

Could this be the end of the clickety clack keyboard as we know it?

These are plastic or metal plates, placed over the keys of a keyboard, with holes through which the user presses the keys. This is useful for people who tend to hit more than one key at a time or need to rest before pressing the next key. Kyguards generally tend to come with keyboards as a pair, but sometimes one from one keyboard model will fit another model. What you have to consider is how the holes sit over the individual keys. Laptop keyguards are harder to find. The image below is taken from the website of Computer für Behinderte who appear to be able to supply a guard for any make of laptop. For the best fit, they ask that they have the laptop for a day (this service probably only practical for customers in Germany).

Ergonomic keyboards are aimed at those wanting to touch type using both hands. Generally they incorporate a split between keys operated by each hand with the aim of reducing strain in wrists and arms. A number of variations on this design are available, including those pictured above. 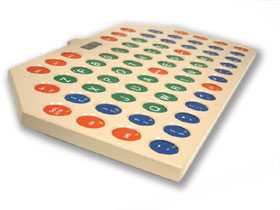 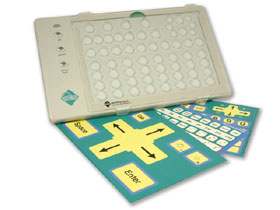 Expanded keyboards can help in situations where it is difficult to accurately locate a normal sized keytop. The larger size gives more area to "aim at". Many expanded keyboards have a "built-in guard" as the letters are slightly sunk beneath the surface of the keyboard.


In case of severe motor impairments the use of a standard keyboard with a keyguard is often insufficient. For these computer users an expanded keyboard may be a powerful aid. An expanded keyboard prevents unintentional activation of one or more than one key at a time by well spaced, enlarged and slightly recessed keys and allows the user to stabilize limb on keyboard without activating keys. (Info and images:Computer für Behinderte).


Concept keyboards are also flat and pressure sensitive. These come in A4 and A3 sizes and have a number of predefined "cells" on their surface. Using a software package it is possible to assign certain keystrokes/sounds/actions to particular areas on the concept keyboard. After defining the areas on the keyboard, a paper overlay can be printed or drawn to show the active areas.

Keyboards with larger keys can help in situations where it is difficult to accurately locate a standard sized keytop. The larger size gives more area to aim at. Some have a built in guard as the letters are slightly sunk beneath the surface of the keyboard.

PJB Systems designed foot operated keyboard. The keyboard layout is not QWERTY and can be modified to suit particular needs.

The PJB systems keyboard is used by Dave Williams (see photo), who commented, " PJB provided a first class service. They provided me with a high quality keyboard which meets my requirements perfectly. They look great and already my typing speed has improved. The new keyboards you supplied are great. I am definitely faster with them..”

Also referred to as 'Butterfly' keyboards. There is the GoldTouch the Kinesis the Fujitsu Siemens and the BTC-8120

LOMAK (Light Operated Mouse And Keyboard) enables people with physical impairments, such as cerebral palsy, quadriplegia and carpal tunnel syndrome, to easily and effectively operate a computer. Using a specially designed keyboard in conjunction with state-of-the-art light sensor technology, a hand or head pointer controls a beam of light that enters, then confirms, the key or mouse function. Confirming each key helps ensure the correct selection is entered, reducing errors and increasing the speed of operation. Pure geometric forms and soft radii support its simplicity and ease of use.
More information . . .

Changing from Qwerty to Dvorak

Mouth Stick
Adjustable-angle mouth sticks that allow better visibility and a more natural writing/typing position. One is a pointer for keyboards or page turning; the other holds implements such as a pen, pencil or paintbrush. The telescopic end makes it easier to adjust the length. (Mouthstick supplier: EuroMedical)