A new handset in the 'Easy' range of accessible mobile phones has been launched in the UK by distributor
Communic8. The EasyUse handset has an anti-glare screen, large characters, large number keypad and other accessibility features. It is available through the RNIB shop or from Communic8 Ltd on a Vodafone Pay as you Talk package at £139.99:

This company sells a selection of mobile and desk phones with large buttons, which are useful for anyone with a disability. Most of thesephones also come with much larger displays

Screenreaders for Mobile Phones and PDAs

There appears to be only a limited number of screenreaders available for mobile phones (Smartphones) and PDAs:

There doesn't appear to be screenreader available yet for a Blackberry. It uses it’s own operating system called RIM Blackberry. What accessibility features Blackberry devices have can be found below.

Converts your mobile device into an easy to access Laptop. This newly introduced product is apparently the world's only dual standard full sized folding keyboard. 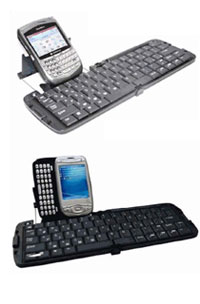 If you are lucky enough to have an Apple Iphone and you are visually impaired you may want to consider using the SIRI system.


Features of Siri on an iphone
For some independent reviews of the SIRI functionality system have a look at:

If you don't have an Iphone but have an Android phone Evi will assist you.

It will work on an Iphone too!